I have a close friend that, about a year ago, kept giving me the run-around whenever I would try to plan something for us to do together.

We had been close since our college days, so I couldn’t understand what was different, and why she didn’t want to make plans with me.

Instead of letting it eat at me, I finally just told her how it was making me feel, in hopes that she would come clean. And she did.

Turns out my friend was suffering from irritable bowel syndrome (IBS). That means at any given time she could be suffering gas, bloating, constipation or diarrhea… and symptoms like that made it hard for her to plan anything. In fact, she was hardly getting out of the house.

IBS is one of those conditions that mainstream doctors used to cover a laundry basket of symptoms. But the most they typically do for it is prescribe an antispasmodic medication. As with most medicines, this only masks the problem, and allows the root cause of the condition to continue to eat away at you.

That makes no sense. Damage to your gut can affect your total body health and increase your risk for intestinal cancers.  Instead of applying a band aid, there are two simple ways to give IBS the heave-ho and get your life back…

I follow the paleo diet. That means I’ve given up grains and most carbohydrates from my diet, especially potatoes.

I written a few times about the not-so-hot potato — mainly about its extremely high glycemic index rating that makes them even worse for spiking your blood sugar than table sugar or high fructose corn syrup.

But there’s something else you may not know about potatoes. Carbohydrates are poorly absorbed by the small intestine and can worsen IBS symptoms.

Unfortunately other foods that are high in fructose and glucose can aggravate IBS symptoms too, like apples, pears, onions, artichokes, and large amounts of wheat.  You should probably steer clear of lentils, cabbage, plums and artificial sweeteners too.

These recommendations are based on the Fodmaps diets for IBS sufferers, but don’t fall far from a simple paleo diet. I know my digestive discomforts eased greatly when I switched to a basic paleo real food diet, with pasture-raised meats, leafy greens and nutrient-dense vegetables.

Modern life is stressful. It’s filled with tiny worries about unchecked emails, family obligations, car troubles, financial missteps—not to mention world affairs. And it doesn’t take long before these stressors takes a toll on your gut…

Gastrointestinal disorders, like IBS, are especially tied to stress almost as much as diet. But stress both increases your chances of getting IBS and makes the disease more severe. That may be why stress-relieving activities can have a big impact on IBS symptoms and quality of life…

Take yoga, for example. Researchers from the University of Duisburg-Essen in Germany recently reviewed six randomized controlled trials that examined yoga’s effect on IBS. Amazingly enough, they found that yoga decreased the frequency of IBS symptoms, the severity of IBS symptoms and anxiety related to the disease. These researchers also found that yoga improved IBS sufferers’ quality of life and ability to function.

Now, there are a lot of potential reasons why yoga is effective against IBS. But there are two reasons that make the most sense. First, yoga is a form of physical exercise, and exercise is beneficial in relieving IBS, like it is for most other diseases. But most importantly, yoga helps calm your sympathetic nervous system, otherwise known as your “fight or flight” response…

You see, your body can’t tell the difference between being chased by a lion and feeling overwhelmed by a growing stack of unpaid bills. Your sympathetic nervous system responds to both of these scenarios as if your life was in immediate danger. It sends extra energy to certain parts of your body, like your muscles, to help you fight off the “deadly” threat. To do this, however, it has to shut off the energy supply to other important bodily systems, including your digestive system.

If you’re feeling stressed out on a daily basis, you can assume certain parts of your body aren’t getting the energy supply they need. And, as you can imagine, your organs can only go so long without a sufficient energy supply before they begin to suffer and fall into a state of disease. But, since yoga calms your sympathetic nervous system, it can stop this unnatural stress response and hopefully the diseases connected to it — like IBS.

Now, there’s no prescribed type or amount of yoga you have to do to improve your stress levels and your health. In the studies researchers reviewed, IBS sufferers found both hatha yoga and Iyengar yoga helpful for their IBS symptoms. And they practiced yoga anywhere from two times per week to two times per day.

What’s most important, is that you do yoga consistently. Pick a time every week (or every day) to do yoga and stick to it. If you do, you’ll find the stress relief and health benefits you’re looking for. If you’re ready to give yoga a try right now, here’s a short yoga routine that can provide relief from your digestive symptoms and the stress that aggravates them.

These two recommendations worked for my friend, and I’m glad we are enjoying activities together again. I hope it works for you.

5 foods to avoid if you have prostatitis 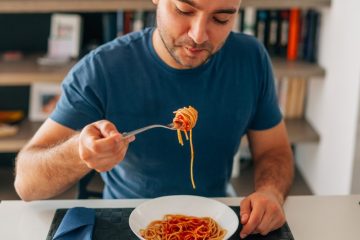