Beginning in the 1970s pharmaceutical companies told us that these synthetic hormones were proven to be safe based on small studies.  And doctors prescribed them almost universally to woman nearing menopause.

But when larger studies were completed in 2002, called the Women’s Health Initiative (WHI), 1 it was revealed that synthetic oral estrogen plus progestin therapy is actually not as safe as we thought.

As a result of the headline news about these studies, approximately 50 million women were then faced with going “cold turkey” off their hormones and living with symptoms. The good news is that recent studies show us the safety of transdermal natural estrogen and real progesterone.

Real versus synthetic estrogen and progesterone

You may have heard of estrogen manufactured from horses urine (Pre-mare-urine, or Premarin®) and the synthetics Cenestin, Enjuvia, Congest, or the esterified estrogens Menest, Femogen, and Estratab. There are many brands being manufactured and marketed as “estrogen” yet contain unnatural molecules such as sodium equilin sulfate, 17 alpha 17 beta-dihydroequilin, and 17alpha-estradiol.

It’s easy to get confused with all the different names, but what’s important to realize is this: These estrogens are synthetic, meaning they have been manipulated in a laboratory and are not the same 17 beta-estradiol that your body makes.

Synthetic progestins are also unnatural hormones. Your doctor may have mentioned some of these to you… medroxyprogesterone (Provera®), Norethindrone, Levonorgestrel, and Norethindrone acetate. Biochemically, our bodies do not know how to manufacture synthetic progestins, nor do we naturally make any enzymes (that science has identified) to properly metabolize them.

In light of the studies that have clearly shown the danger associated with synthetic hormones, it’s interesting that the American College of Gynecology still promotes the use of synthetic progestins while calling bio-identical progesterone a “so-called” hormone.

Why take natural estrogen and progesterone even after menopause?

Natural estrogen replacement (as a cream or troche under the tongue, not pills you swallow) simply works better than synthetic estrogen pills for reducing menopausal symptoms. A study using estriol therapy that was reported in the November 1987 Hormone and Metabolic Research 5 showed that it reduced menopausal symptoms in 92% of subjects, and completely elimination hot flashes and sweating in 71% of the subjects.  It completely eliminated depressed moods in 24% and this was reduced in severity for another 33%. It also reduced headaches by two-thirds and skin improved in some of the subjects. And there were no significant side effects reported.

Furthermore, large clinical trials have now verified that natural (bio-identical) estrogens and progesterone are effective for curbing menopausal symptoms. Even more importantly, they reduce diseases such as breast cancer, cardiovascular disease, osteoporosis, and Alzheimer’s dementia.  Let me tell you even more…

In the Italian Longitudinal Study on Aging reported in 1998, researchers found that among the 2,816 women aged 65 to 84 years who were followed, the rate of Alzheimer’s disease was only a fourth as much among estrogen users compared with the general female population of the same age and multiple other risk factors. 6  A study reported in 1996 found that that among 156 women who reported taking estrogen after onset of menopause, those who later developed Alzheimer’s disease did so much later (delayed onset) and significantly less (60 percent fewer) compared with women who did not take estrogen. Also, those who had used estrogen longer than a year had even a greater risk reduction for Alzheimer’s disease. 7

We know that transdermal estrogen lowers bad cholesterol (LDL) and raises good cholesterol (HDL). Coronary artery spasm, which precipitates a heart attack by squeezing down areas of the vessel where there is already atherosclerotic plaque, is decreased with the use of estrogen and also estrogen plus progesterone. 8  Estrogen lowers anti-thrombin III levels, thereby lowering recurrent venous thrombosis (vein clotting).

It is clearly known that transdermal estrogen supplementation reduces bone fracture rates in postmenopausal women.  Subjects using only a low dose of only 0.1 mg per day stopped losing bone density and dramatically reduced their fracture rate as demonstrated in two clinical trials. 910

Note that estrogens are naturally made in a woman’s body and are called estrone (E1), estradiol (E2), and estriol (E3).  Be aware that taking estrogen by mouth carries some health risks from the unnatural metabolites created when it passes through your liver, but this does not occur when it taken as a troche or cream. And real progesterone from can safely be taken by mouth or as a cream.

Progesterone is calming and provides for restful sleep. In addition to treating PMS symptoms, progesterone supplementation during near the menopause years acts much like estrogen in treating menopausal symptoms (hot flashes, breast tenderness, decreased sex drive, vaginal dryness, irregular periods, and even urinary leakage or urgency). A one-year trial of bio-identical transdermal progesterone cream in postmenopausal women produced a significant reduction in hot flashes according to a 1999 report in Obstetrics and Gynecology. 14 But it has important long term health effects too.

Progesterone also is beneficial to heart health. It has a vascular relaxation effect (to lower blood pressure and the strain on the heart). The Women’s Health Initiative studies showed that progesterone (unlike synthetic progestins) increases the cardio-protective effects of estrogen and reduces the risk of heart attack and stroke. Progesterone also improves lipid profiles and helps estrogen to improve lipid profiles (unlike synthetic progestins). There are several similar studies to show this beneficial heart health effect from natural progesterone.

Scientists have observed that natural progesterone stimulates osteoblast activity (new bone formation) and helps prevent osteoporosis. 20  Estrogen does too, and when added together, progesterone and estrogen collaborate for maximal prevention of bone loss. 21

To feeling good in health,

Diabetic Retinopathy – What Causes It? 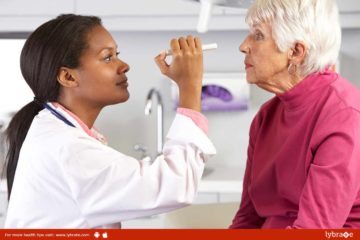