The various types of eating disorders are as follows:

1. Anorexia Nervosa: This eating disorder is characterized by intense fear of gaining weight and an unhealthy obsession with prevention of weight gain. Anorexic people severely restrict the amount of food they eat, the types of food they eat and weigh themselves repeatedly. They perceive themselves as overweight even if they are alarmingly underweight. Anorexic people live in denial. They have a distorted self-image and low self-esteem. It is a very serious mental illness and has the highest mortality rate due to starvation and suicide. Anorexia nervosa also causes infertility.

2. Bulimia Nervosa: Although people with bulimia nervosa maintain a relatively healthy or normal weight unlike anorexic people, it is a fatal disorder. Bulimic people go through episodes of overeating or binge eating that is uncontrollable and then they engage in purging activities such as self-induced vomiting, excessive exercising, over-consumption of laxative and diuretics, fasting etc. They are severely dehydrated due to purging of fluids and swollen salivary glands.

3. Binge Eating Disorder: People with binge eating disorder also go through episodes of overeating which are uncontrollable but do not resort to vomiting, exercising or using laxatives to keep their weight in check. Most people with binge eating disorder are overweight or even obese, and this disorder is predominant in the USA. Patients suffering from this disorder eat even when they are not hungry, and fill themselves with food till it becomes uncomfortable and leads to serious health complications.

5 Foods That Naturally Detox And Cleanse Your Body! 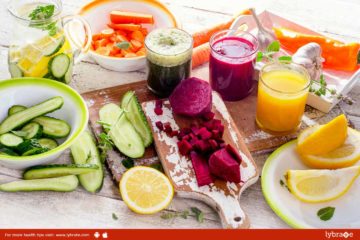