We say it all the time, and just chalk things up. Hey, that’s how it goes, right?

Most of us have lived our lives believing that certain things just happen… that they are meant to be… that we’re powerless to stop or change them.

Getting old is one of those things. Now, I know that technically, we actually do get older in years. But conventional doctors have groomed you to accept that “diseases of aging” is a real thing. That a deteriorating mind and body is inevitable.

But what if the opposite were true? What if aging is a hoax, and diseases are causing it?

I’ve read and had conversations with many doctors of natural medicine who say there’s nothing natural about the aging process.

This is going to eventually turn medicine on it’s head.

But until then, people who believe aging is bogus are going to get labeled “quacks” and worse. At the same time, there are those among us who believe every word in the Bible, but don’t want to consider that Abraham’s wife, Sarah, could have really lived to be 127.

For women, we think of menopause as perhaps the most significant marker of aging. It’s that stage in life that signifies the end of our reproductive cycle… that “natural” biological process that ends fertility… and the beginning of old age.

It’s soon after and sometimes during menopause that the flood gates open to heart disease, osteoporosis, weight gain, loss of vitality and energy — all of the diseases and conditions we accept as yet another step in this journey of so-called natural aging.

But researchers have found the opposite to be true…

In fact, the results of not one but two studies, found that lack of sleep and the symptoms of menopause cause women to age faster — not the other way around.

“For decades, scientists have disagreed over whether menopause causes aging or aging causes menopause,” said Steve Horvath, a professor of human genetics and biostatistics at the David Geffen School of Medicine at UCLA and UCLA Fielding School of Public Health, and a senior author on both studies. “It’s like the chicken or the egg: which came first? Our study is the first to demonstrate that menopause makes you age faster.”

How menopause ages your body

In the end, they discovered that menopause speeds cellular aging by an average of 6 percent. That may not sound like much until you look at it this way…

According to Horvath, if a woman enters early menopause at age 42, eight years later her body would be a full year older biologically than another 50-year-old woman who entered menopause naturally at age 50.

“On average, the younger a woman is when she enters menopause, the faster her blood ages,” explained Levine, a postdoctoral researcher in Horvath’s lab. “This is significant because a person’s blood may mirror what’s happening in other parts of the body, and this could have implications for death and disease risk.”

Remember when doctors were pushing hysterectomies on women like tonsillectomies several years back? Based on these findings those women could have been robbed of years.

There may be no way to avoid menopause later in life. But you may be able to control the symptoms of this condition that are aging your cells…

Sleep to stave off aging

The importance of sleep can’t be over stated…

I written to you before about the importance of sleep to boost cancer survival… Dr. Mark Wiley has written about the sleep-Alzheimer’s connection, and Carl Lowe has shared proof that lack of sleep leads to heart disease, obesity, and diabetes. Even bone loss is connected to sleep.

These are all what we think of as “old age” diseases.

In a separate sleep study, researchers found that postmenopausal women with five insomnia symptoms were nearly two years older biologically than women the same chronological age with no insomnia symptoms.

“Not getting restorative sleep may do more than just affect our functioning the next day; it might also influence the rate at which our biological clock ticks,” said Judith Carroll, an assistant professor of psychiatry at the UCLA Semel Institute for Neuroscience and Human Behavior and the Cousins Center for Psychoneuroimmunology, and first author of the sleep study.

“In the women we studied, those reporting symptoms such as restless sleep, waking repeatedly at night, having difficulty falling asleep, and waking too early in the morning tended to be older biologically than women of similar chronological age who reported no symptoms.”

And that’s the science.

It’s simple enough. It appears that if we prevent disease we can slow the hands of time. And it’s a message I’ve heard over and over again in the alternative health realm.

And the best place to start — obviously — is with sleep… but for menopausal women it’s just not that easy.

Dr. Michael Cutler has written extensively on natural hormone therapies that may impact sleep. But whether you want to explore any kind of hormonal treatment is a complex decision. What’s not complex is the fact that lack of sleep, from night sweats or any other reason, is setting you up for disease and aging.

So what about Sarah (wife of Abraham)… how could she have obtained the sleep she needed to live a long disease-free life? I believe this is how…

Sarah lived in a world where her very existence required her body to be in constant motion. It’s probably safe to say if she’d had a fitbit back then she’d have easily logged more than a thousands steps every day, and I’d bet her heart rate was safely elevated, just enough to be beneficial throughout all of it.

That means Sarah most likely got the exercise she needed to eliminate the belly fat we gain during menopause, that — according to Dr. Diana Bitner, MD, a North American Menopause Society Certified Menopause Practitioner Physician and board-certified OB/GYN — spurs hot flashes and night sweats and leads to poor sleep.

In an interview with Huffington Post, Dr. Bitner also shared that women who exercise have better sleep, better mood and better quality of life, and noted that her own patients who exercise on a regular basis have fewer menopause symptoms as well as improved body chemistry — lower cholesterol, better sugar control, less weight gain, and stronger bones.

So you’re not powerless after all. Adding exercise to your life should help you slow menopause’s aging effects by giving you back the precious sleep you need to live to be quite old and well.

The top nutrients for healthy eyes and vision 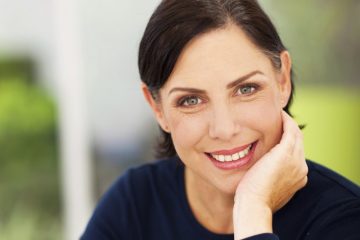